How Does A Crane Work?

When asked, how does a crane work, most people would have a straightforward answer in mind. Something like, a crane has a long arm or boom used to lift and move heavy objects that can move up and down and rotate 360°. The one end is anchored to a base while heavy objects attach to the other. It also has some form of an attachment to grip loads and a cable system that reels in or out to lift or lower a load.

However, this reveals little about the inner workings of a crane. For example, what powers the boom or the cable/pulley system to lift these heavy loads? How is it controlled? How does the crane remain balanced?

This article will give you a better understanding of how cranes manage their herculean lifting efforts. Whenever hiring such a critical and expensive piece of equipment, it pays to be informed in order to make the right decisions and use your equipment to the greatest effect.

Anatomy of a crane

Before we dive into the inner workings of a crane, we might benefit from a quick anatomy lesson. Once again, there are many different cranes – each with their own, unique anatomy.

A mobile crane is typically divided into two main sections: the lower and upper. The lower is a commonly used term for the vehicular body of the crane, also called a carrier. The upper consists of the actual lifting equipment mounted on the body.

The two usually connect by a turntable mechanism (or, slewing unit) which allows the upper to rotate in any direction on top of the lower.

In turn, the lower (or carrier) usually consists of the following parts:

The upper (or crane) consists of the following:

There are also differences in how the cranes move about. Most cranes have normal tires, just like your typical hauling truck. However, there are also crawler cranes, rough terrain cranes with tractor tires, and even barge-like floating cranes. 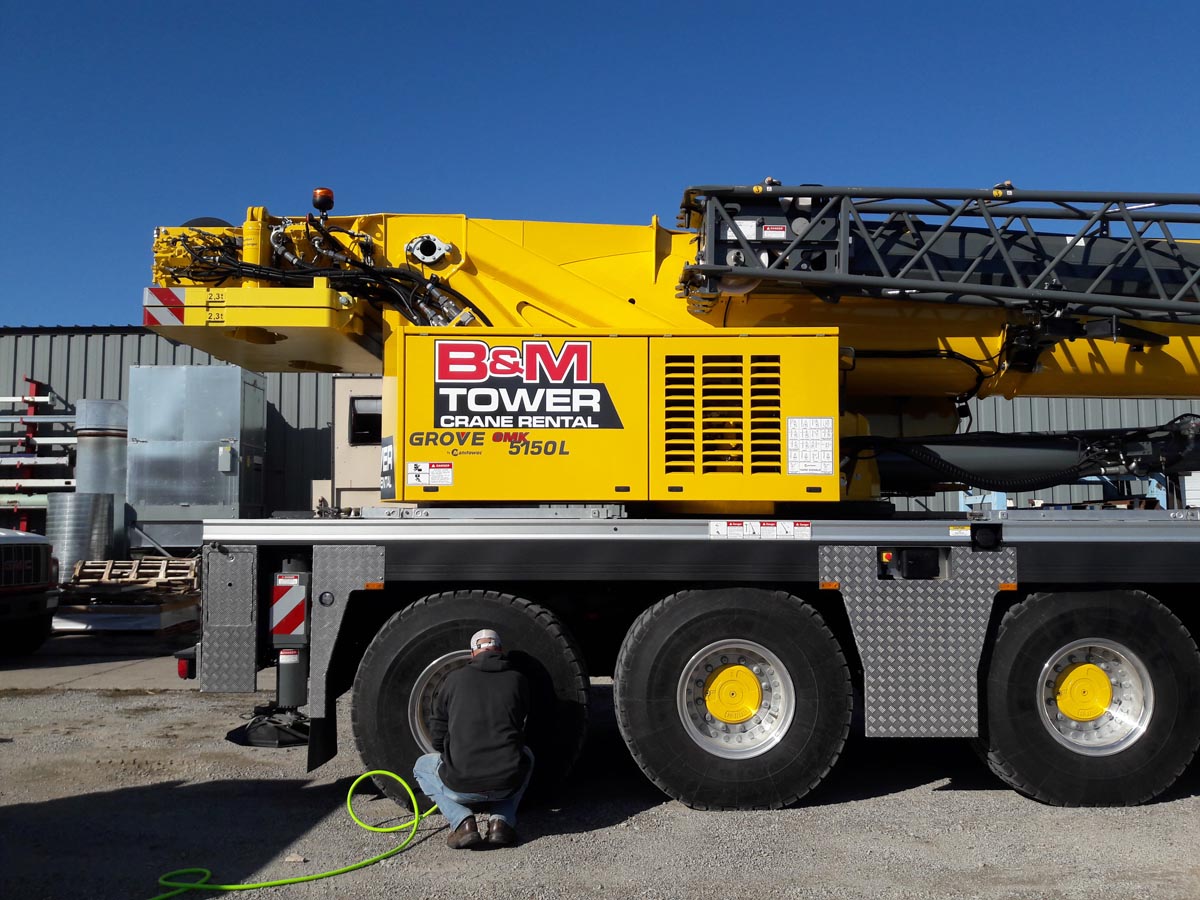 How does a crane work?

So, the more enthusiastic among you might have already pieced together how a crane operates. On the surface, a crane is a simple piece of equipment used to lift heavy objects.

In reality, a crane consists of a number of simple mechanisms that combine, giving it a mechanical advantage to handle massive loads.

Most cranes use a single-engine that powers both the carrier and the crane. However, more powerful mobile cranes may have separate engines powering each. When the same engine powers both, there is usually a hydraulic system in or under the turntable powered by the engine.

You can read more about how hydraulic cranes work here.

The luffing cylinder, as well as the turntable, are responsible for moving the boom vertically and horizontally.

The arm (or, boom) attaches to the turntable. In the case of a telescopic boom, it can only extend in one direction by pushing out a series of concentric sections. A jib boom consists of a main mast and a secondary, articulating arm connected by a joint. Similar to an elbow.

Telescopic booms typically have a longer range and larger maximum capacity. Jib booms, on the other hand, offer more precise handling, particularly on the horizontal plane.

Regardless of the boom, a cable usually runs the length of it. Pulleys and gears are located in the hoist block, jib arm (if applicable), and slewing unit. These pulley systems help the crane establish its mechanical advantage and to control the movement of the hoist line.

The controls are fairly straightforward, although they require a lot of experience to master. There are usually two joysticks: one controlling left-right movement and the other forward and aft movement. Foot pedals control the telescoping of a boom as well as the power of the pressure of the hydraulic pump.

Although a crane might seem like an obvious and simple piece of equipment for your job – it’s anything but that. On top of being an absolute necessity, cranes are expensive and potentially dangerous heavy machinery.

That means you need to have some working knowledge about a crane to make sure it’s fit for purpose.

This should already serve as a solid introduction to how cranes operate. However, we also touched on the fact that there are many types of cranes out there, each with their own special function.

We’d suggest you read more about the different types of cranes to know which is the best choice for your job.